Guantanamo: demands for last British inmate to be freed 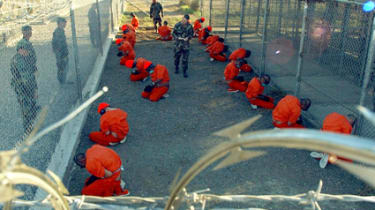 THE human rights group Reprieve has called on the US government to release Shaker Aamer, the last British resident still held in the Guantanamo Bay prison camp.

The group, which campaigns for prisoner rights, arranged an independent medical examination for Aamer, and found him to be both "physically and psychologically" damaged by his ordeal.

Aamer has twice been cleared for release to Saudi Arabia. But the Saudi national is seeking to return to the UK to live with his wife and family who are British nationals based in London.

He lived in the UK with his family for several years in the 1990s, and worked as a translator for London law firms. He claims to have been working for a Saudi Arabian charity in Afghanistan when he was captured by local militia and handed to the Americans in late 2001. He has been in detention since then and has never seen his fourth child who was born after his capture.

Dr Emily Keram, who carried out the examination of Aamer, said: "The length, uncertainty, and stress of Mr Aamer's confinement has caused significant disruptions in his... ability to function. He is profoundly aware of what he has lost.

"Mr Aamer requires psychiatric treatment, as well as reintegration into his family and society and minimisation of his re-exposure to trauma and reminders of trauma."

Aamer has been held in Guantanamo for 12 years without charge. A Foreign Office spokesman told ITV News that the UK Government was committed to securing his release.

"Mr Aamer's case remains a high priority for the UK Government and we continue to make clear to the US at the highest levels that we want him released and returned to the UK as a matter of urgency," the spokesman said. "We have received the letter from Reprieve and will respond fully in due course."

President Obama has called for the closure of the Guantanamo Bay detainment facility, but has been forced to backtrack on a 2008 election pledge to shut down the camp. According to Human Rights Watch, 600 people have been released and repatriated, but 155 detainees remain incarcerated.